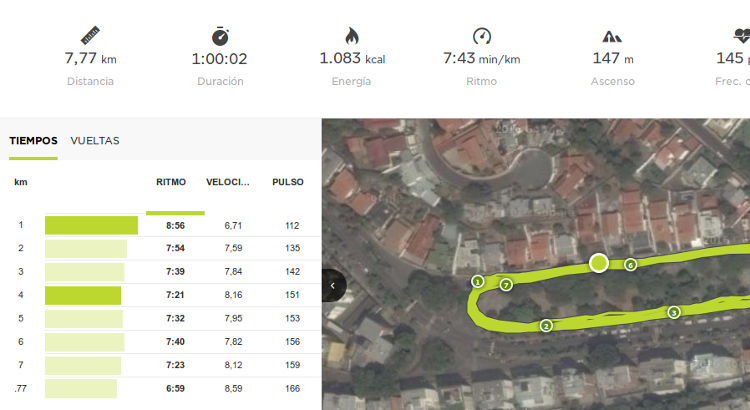 Even if doesn’t look that way, this is not a post about fitness, in fact, this mark is very unimpressive for those athletes that are used to run a kilometer (and yeah, I am sorry for you, imperial readers, but this is a metric post) under 5 minutes, but I am not one of those, not yet. Is not a round nice number like the 8 km in an hour that I was aiming for. However, there was something interesting in this, at least from me.

A bit of context. About three months ago I decided to start walking/jogging/running at least three times a week. The goal was to have a time space to reflect and calm myself in the middle of my usual days. Unlike any other exercise, walking/jogging/running allows me to put my headphones and disconnect from the world and my thoughts for while. Get into a zen like state through the rhythm of my steps, my breath and the music. When I started, overweighted  and dragging years of smoking between 20 and 30 cigarettes per day, I was able to walk 5.4 km in an hour. Around June 15th I was starting to feel more fit and loosed some weight and I was able to do the same 5.4 Km in 52 minutes, basically took off 10 minutes at the same distance.

At some point I started to try periodically, as a way to check my progress, how much distance I could do in an hour (which is a lot more fun that just taking time off the same distance). In those tries I was seeing some progress, first at 6 km, then 7.18 km and finally, this recent one.

I was totally convinced that I was able to pull the 8 km in an hour. In hindsight, I am not sure why, but I was. This months I realized that as important as how your body feel at the time of running, is how your mind and emotions that define how well you will do it. At the beginning I thought that the more things I got going through my head, the better I ran, however later I realized that even without too much stress, and even happy, I could do as good if not better.

But this past Friday, before my latest attempt at the hour, my emotional state was the worst on months. Hundreds of troubling thoughts and feelings crossed my mind, and instead of blocking then running, I was simply stopped. I could not run anymore, just like…

Despite that, and despite still not feeling emotionally fine, on Monday I had a good sessions (which is normal after 2-day rest) so, by the next day I was going for the 8 km in an hour. I was sure I could easily do it, that all that internal turmoil was going to fuel me instead of blocking me.

So I started the chase of the 8 km, sure that I was going to make it. But as the time passed I started to realize that I was not keeping the necessary rhythm, at first I took it calmly, thinking that the natural progression will put me on par, and by the time I realized that I was behind, in the last 15 minutes, it was too late, even as I tried a last push, that was nullified by the worn out of the run. Bottom line, I only got to 7.77 km in 60 minutes.

At that time I felt disappointed and frustrated for not being able to achieve my goal. This is unsurprising given that I still hate to lose, even with my own expectations. After thinking more calmly about it, I concluded that I had nothing to blame myself for, and that I should be happy to break my personal record. As common place as it reads, I think that you should give your best effort, put your heart into something and believe in it, without fear. The results may vary and not be what you expected or wanted to be. Sometimes the timing is not right, sometimes the circumstances stack against your wishes and, many times, we became our worst enemies. Also, you must not fail in the trap of being to conservative about your effort, saving something for later were that may be too late, that could be as counterproductive as rushing all in at the beginning.

At the end, what matters is that you give your best shot at it and feel at peace about it, and if it is not peace what you feel but frustration, sadness, anxiety or any not so positive feeling, that’s ok too, don’t try to run and hide from those feelings because they are part of our life and what define us. Instead try to use that in your next try, because you need to keep trying. 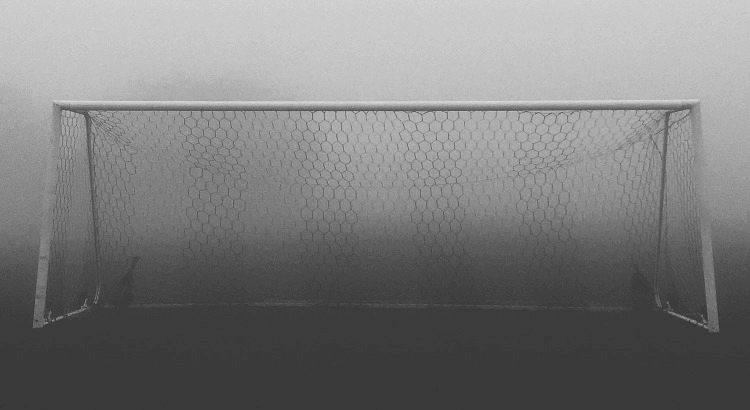 It’s a bit naïve to think we have all figured up when we start to travel a new road, that we have all planned and that we know what will do and how we will react to every circumstance that happens along the way.  One of the things I learned in my life is that planning, as a tool to diminish uncertainty and to give us confidence, is overrated. It’s more important the ability to adapt to the inevitable surprises that the road ahead will bring. What it’s indispensable to travel is to have a reason and a goal. I already wrote about my reasons. and now I will write about the initials goals that I have.

When I visualize where I want to be in 19 months and compare it with where I am now I find that the gap can be overwhelming. I know that my goals are ambitious and that may be contradictory sometimes, or that may need incompatible actions in order the achieve them. So to better define a prioritize the “scope of this project” it is needed to classify the goals as follows:

Professional Goals: What I want to spend my productive time in the next 19 months? What I expect to accomplish?

Health-related Goals: What are my habits now and how they impact my health? What they should be when I turn 40?

Emotional Goals: Basically, how to avoid getting crazy on this road ahead, and how to achieve balance.

Each goal category deserves a detailed explanation on their own, so instead of making this a long post, I will make a post for each one in the next days. 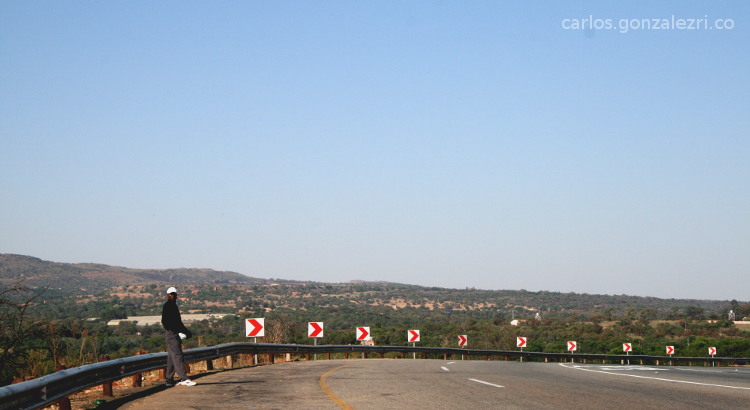 At this point is worth to ask, Why another blog?

I must confess that I never wrote a diary, but today I am stepping into a road that I want to document and share.

Until a couple of years ago (or maybe four) my life was pretty traditional and relatively successfully. I have found my partner for life, and we had built our common life project for 14 years. First we prepare ourselves academically, then through our professional efforts (always as employees and living of our paychecks) we acquired the necessary material goods – our own house, a car – to keep building our road together and to keep developing our home and family, and be blessed with two beautiful childs. Basically, everything was perfect. We had love, wealth, successful careers  and two precious kids.

On September 23, 2013, my wife passed away. Both her illness and her passing meant a deconstruction process in my life, rendering obsolete many paradigms, such as security and success. Without getting into details, I can say that this process brought a halt to my professional career, affected my physical and psychological wealth fare, took me back to old and harmful addictions, and the big challenge of raising a 4-year old boy and a 2-year old girl without their mother.

I have dedicated the last two years to restore myself. First on a personal y psychological level, recognize the loss, grief and overcome a clinical depression. After that, on second place, begin the rebuilding of my professional career, regain my self-confidence, learn to feel productive again and try to understand and recognize what I want to spend my time doing and what not. Today I can say that I accomplished both of those goals, but only on a first stage. I barely put in place a foundation from where I can see the road ahead that I need to walk to bring a better life for my and my kids.

So, Why another blog? Because I am starting to walk that road, a road that is probably too ambitious and where success is a slim chance, but nonetheless a road worth to travel and to document.  Today, after two years of restoration, I can say that I know what my goals are and that I have a deadline to carry out them.

My 40 birthday is one year and seven months from today.